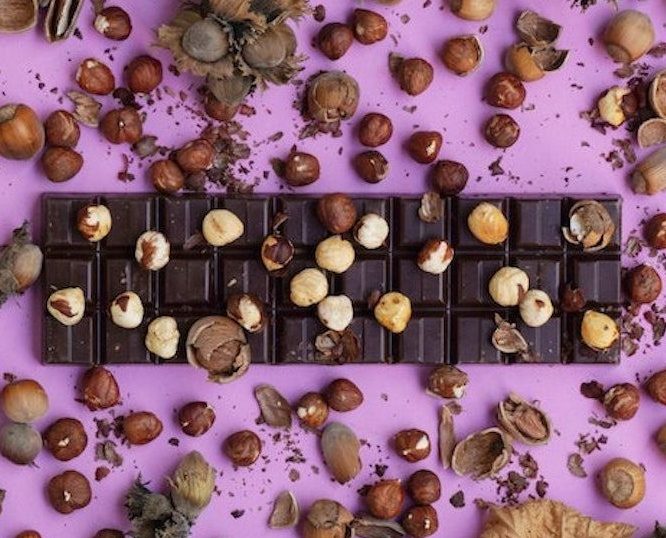 I can smell chocolate 500m away. I can sense it in my deepest soul when it’s near.
In our house growing up we used to say ‘are you chocolatey’ when we had PMS because I would turn into a raving chocolate maniac leading up to my monthlies.
In my early twenties when I was most controlling about my food. I was such a clean eater. Everything was juicing, smoothies, salads and good food. I would limit everything, no portion size that was never my thing, but I would limit ‘badness’. Never ever ate a takeaway, chips, chinese, pizza. I would turn my nose up at it all. But chocolate …. I used to stash in my sisters house (which was next door) to put limitations on myself. She would tell this funny story how herself and her flatmates would be sitting in the evening watching TV and they would see me pass by the window. But I wasn’t coming in to hang out or even say hi. Two minutes later they would see me pass back. I was going in to get a piece of chocolate that I had in her cupboards.
When we were kids Easter was hilarious. All of my eggs were hoovered up on the day by me. My sister would still have some in October, I would find them (with my great sense of smell). In the presses I would sneak a piece and put it back. She could always eat a small piece and leave it. I never understood that.
As an adult my mum would ring me and say ‘were you in my house… well it was either you or a little mouse.” I had called in for one reason or another but I knew where the chocolate was hidden and I would go and devour.
Eating behind the fridge door is a common occurrence. My husband always says ‘just sit down and eat the whole thing.’ But I still don’t. I go to the fridge and take a square. And go back 5 minutes later. If my daughter comes into the room I wouldn’t dare kiss her in case she smelled the chocolate off me.
If it’s there it’s gone. I have bought chocolate for my husband but if he doesn’t get it before I do, then tough luck. It’s gone. Especially if I am working from home. Too late! If he buys some for ‘the house’. I will eat my one and then everyone else’s.
Interestingly I hate chocolate cake and chocolate ice-cream.
I wish people would limit me. I buy those Kelkin Rice cakes. I have never not eaten 6 of them. I always feel a little bit sick after the lot because it’s just too much. 3 would be perfect. Everything needs to be halved.
I have often asked my husband to hide the stuff, the chocolate when he brings it into the house. His response is usually  ‘cop on you’re an adult!’
When he buys chocolate I don’t like I say ‘’eww’. He replies ‘don’t eat it so’. That never happens! Even a horrible substitute he bought doesn’t stand a chance.
Last week I was driving from Dublin and bought Toffees (12 pack). I took out 6 and threw the box back to the boot so I couldn’t get at them. The glove compartment doesn’t work because I can reach over (tried and tested).
Last Easter my husband bought some chocolate eggs. A week later they looked untouched from the outside. On the inside they were missing all of the accompanying sweets. I am a pro at getting out the small packet out of the box without opening it. If I see it I eat it! This was a lot harder in the 80s when the sweets were on the inside of the egg!
When I created juspy, taste was the most important thing. It had to be good enough to make me feel like I was eating something bad, but I wanted it to be good. Guilt out, goodness in. I wanted it to be functional with some nutritional value. I love real ingredients that help your health. Every ingredient in this has a purpose. Recovery, energy, anti-inflammatory, healthy life, skin focus- an inside out approach.
Juspy tastes like a luxurious chocolate treat but is actually pure goodness. We sneak the good stuff in and hide it in divine organic cacao. Made with 10 natural ingredients, no refined sugar, no stabilisers, no additives and lots of goodness. We worked with leading nutrition company Nutritics (who are also the team behind Natasha’s Law UK Food Labelling Resource) so that we could provide you with a full breakdown of all nutrients and why each serving packs such a punch. Find out more about what’s inside Juspy here – What’s in it
Chocolate